MONEY WOES FOR THE UN

Recently, as was announced by the Bought and Sold Press, the Palestinian Authority was granted membership in the United Nations UNESCO.  The announcement was lauded as a break through for the PA and cheered by the UN and those who want to see the PA established as a parasite nation.  The PA vowed it was applying for membership to 16 other UN organizations in celebration of it’s PR victory.  That celebration however encouraging to the Palestinians is to be short-lived.

Fast forward to today November 3rd, 2011.   In a surprising reversal, Ban Ki Moon, the UN General Secretary announced  that the PA should be content with what they have gained and not seek membership in other UN organizations.  This is coming from a man who has encouraged the Palestinians in their political plans until now.  So why the change of heart?  Money, Money, Money.

After UNESCO accepted the PA as a member, the United States, Canada and Israel cut-off funding the organization.  The United States and Canada supply 30% of it’s operating budget.  The US gives about 64 million annually to UNESCO.  Israel is also cutting off it’s 2 million dollar aid as well.   Ban Ki Moon is trying to head off a financial collapse by discouraging the PA from further membership in it’s organizations.  The United States by law, cannot support any UN organization that has the PA as a member.  Personally, I hope the PA applies for membership in all the UN organizations.   The US should not be funding that morally bankrupt monster with even $1 US dollar.  The building should be vacated of the riffraff and used for American interests (US citizens, not US Gov.) 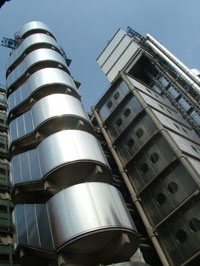 Without warning, Lloyd’s, the world’s oldest insurer announced that it has withdrawn its money from European banks.  According to Lloyd’s, the banks are in danger of failing as the debt crisis in Europe continues to intensify. The company’s Finance Director, Luke Savage, put it simply:

“If you’re worried the government itself might be at risk, then you’re certainly worried the banks could be taken down with them.”

Which European governments is Lloyd’s speaking of? They’re not saying publicly. But we should note that Lloyd’s didn’t just withdraw its money from only Greek banks; it withdrew its money from banks from all over the European Bloc.  When the world’s oldest insurance company, a firm that for 323 years has made its living by accurately calculating the odds of future disasters . When that company suddenly takes its money and runs, it’s a MASSIVE red flag for investors— a clear signal that the start of the end is near!

Lloyd’s has every reason to worry. In addition to the government debt crisis that’s threatening to destroy European banks, a huge credit crisis is spreading across the Continent as well.  Spanish and Italian banks are rejecting massive numbers of loans and charging customers more as the sovereign debt crisis continues to drive their own borrowing cost higher.  Any way you look at it, this shrinking of European credit markets is the worst kind of downward spiral:

MONEY WOES FOR THE PA

The EU (European Union) gives the PA about $90 million a year.   The looming financial disaster may cause a shortfall of cash, not only for UN who receives billions in dues from it’s member nations, but the PA as well as the crisis further develops.   As this crisis hits the US, the estimated $150 million that we give to the PA could dwindle and disappear.   This could stall the PA/Hamas political agenda, at least in some respect. One can only hope and dream.  But time can only tell.